skip to main | skip to sidebar

Since the beginning of 2021, the Hill Country - Edwards and Trinity Aquifer region has received a little over 18 inches of rainfall, providing some relief to the Stage II Alarm Drought (declared on October 8, 2020). Consistent small rain events in March and April raised soil-moisture content (amount of water present in the soil), priming the area for runoff conditions. Ten inches received in May and June - usually the two wettest months of the year - produced above-average rainfall, generating plenty of runoff to area creeks and much needed aquifer recharge. On May 1st 2021 Lovelady, the District’s drought index well, began to rise for the first time since July 2020. 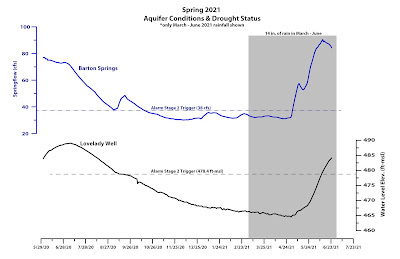 In response to the May-June rainfall, aquifer level at the Lovelady monitor well and springflow at Barton Springs have both risen above Alarm Stage II drought triggers (Figure 1). Lake Travis water levels have also seen an increase of about 7 feet since January 2021. The BSEACD weather station has reported 2.7 inches in June and 1.3 inches so far in July, about 0.7 inches below the month’s historical average, but rain chances persist in July.

Happily, the majority of Texas is out of meteorological drought status, with only a few areas in West Texas demonstrating “abnormally dry” to “severe drought” conditions (Figure 2). For updated information on the drought status throughout Texas, refer to the United States Drought Monitor. 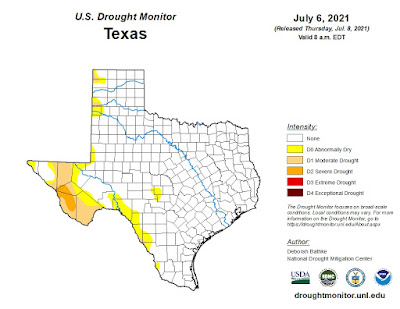 With both Barton Springs and the Lovelady water level currently above their respective Alarm Stage 2 drought triggers the BSEACD Board declared “No Drought” conditions at the July 8, 2021 board meeting. For the District to declare drought conditions, either Lovelady water levels or Barton Springs flow need to be below their respective drought thresholds. However, to exit a drought stage, both spring flow and water level must rise above their respective drought trigger values. This latter requirement keeps the District from making multiple declarations about drought over short periods of time.

The spring and early summer rains have helped lift us out of drought. However, July and August are historically very hot and dry months, and without additional rainfall this wet trend may reverse resulting in drops in springflow and aquifer levels. Figure 3 shows 2020 Lovelady water level trends juxtaposed to 2021 trends. The green line indicates 2020 water levels significantly increasing due to March-May rainfall, then declining back into drought within 77 days of the dry summer season. 2021 currently demonstrates the same pattern, with a much more dramatic increase during the rainy months. With the clear correlations moving through the spring, we might predict a similar decline through summer 2021 without additional rain. 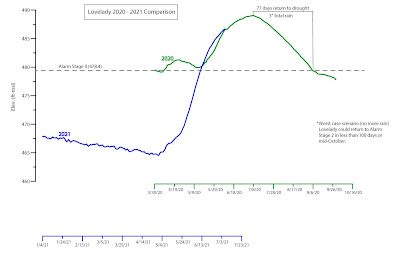 According to an unknown state meteorologist from Texas in 1927, “Texas is a land of perennial drought broken by the occasional devastating flood. “We see this statement ring true as 2021 rolls into summer. For now, we exit drought status. Drought will always be a concern for our beloved home state, so let’s maintain our dedication to conserving our most precious natural resource. 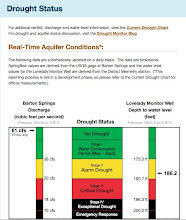